Canadian government documents were uncovered that showed a planned trip for Chinese troops to attend a cold weather tactical training hosted by Canadian military; these training sessions were cancelled at Trump’s request. 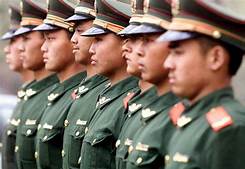 Reports of this training were uncovered after a reporter for Rebel News Network requested documents about an anniversary celebration for the Canadian navy.  The Canadian military was working behind the back of Trump and the United States.  Chinese forces are a looming threat should the relationship between the United States and China head further south.

These exercises would not have been able to occur on Chinese soil, so they have proven they will work to make their military ready to attack in cold regions of the world.  This is a major threat as areas of the United States and many military allies are within cold regions.

Canada has been a strong ally to American military operations for many years, and that relationship can be expected to continue, but this certainly creates some distrust.  Additionally, the exercises were slated to continue until the Trump Administration urged Canada to rescind their invitation.

The far-left Canadian Prime Minister Justin Trudeau has been accused of many shady financial dealings with Chinese entities.  These accidations along with a looming relationship between the two military forces leads to a major threat for the entire world.  Americans cannot allow Canada to align with enemies, and the Trump administration put a stop to it.