ANTIFA has been causing widespread unrest in the United States for years. They are making headlines again as they are infiltrating the protests and riots across the nation that are marching for justice for George Floyd. ANTIFA is looting businesses small and large, burning down police stations, and harming other citizens. 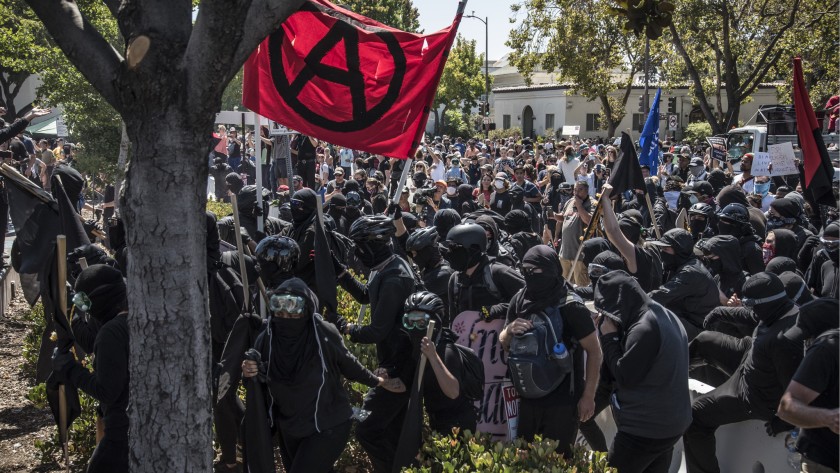 ANTIFA stands for anti-fascist, which is the ultimate case of irony. The movement can be traced all the way back to 1930’s Germany, when ANTIFA started as Antifaschistische Aktion. It was a communist, Marxist movement that formed out of opposition to Adolf Hitler’s Nazi regime.

ANTIFA evolved in the different generations that followed, but it has consistently been a far left movement that works to end capitalism and promote marxist, communist governments. They claim their mission is to end fascism, but employ all the methods of fascism to accomplish their goals.

The antifascist movement has always been the most visible and prominent over the past few decades when a non-liberal government is in place. When President Trump won in 2016, it was a wake up call to the far left that they no longer had any bit of influence in the White House. As a result, they have instigated hundreds of riots since.

Riots in Portland, Oregon following Trump’s election victory turned violent, as people were injured and businesses were destroyed and looted. The same happened in D.C. after Trump was inaugurated, as well as in 2017 at The University of California Berkeley. The common theme among ANTIFA is destruction of property and physical violence and threats to others.

ANTIFA also gained notoriety in 2017 at the Unite the Right rally in Charlottesville, Virginia. They attacked protesters and fought those who they viewed as racist. ANTIFA also “doxes” anyone they view as enemies, by releasing personal information, addresses, family member’s information, and anything they can to terrorize their opponents.

By using violence, the antifascist movement hopes that fear will silence their political enemies. They are not interested in peaceful methods of change, but rather barbarity to instill immediate change and overthrow the capitalist system of the American government.

And now in 2020, President Trump has taken the strongest stance yet by an elected official by labeling the movement as a terrorist group. ANTIFA is working nationwide to burn down and loot American cities, in their biggest coordinated effort yet.

Sadly, Democratic politicians and hypocrite liberal celebrities are promoting fundraisers to bail out those who have been arrested at the riots. Some of those arrested inevitably include ANTIFA. This is not only morally reprehensible, but dangerous.

Will you stand by and watch ANTIFA be bailed out for looting and burning our American cities?

Make a secure one-time or recurring donation to Defend US today to put an end to the madness!